With Vaino, OH2LX, I have exchanged several e-mail messages on the
subject of measuring field strength.

Vaino has many years of experience in that field and I thought
subscribers to the reflector might be interested in his
observations. So I asked Vaino permission to distribute our
communications via the reflector and he kindly agreed.

We have been measuring a number of LF/MF/HF stations
with calibrated measuring system using a R&S ESH3
for more than 10 years.

There have been no breaks in DCF77 transmission.

In June the daytime values have been stabilized to
show a rough summer time ground wave F-s.

Our attempts to calculate ERP even for e.g. nearby
Decca station (d=12 km) have not been succesful
(after more than 10 yrs of continuous measurements).
ERP's have been checked by overflight measurements,
we use a Piper Arrow for such flight measurements
and specially tailored sofware for calculations.


Dear Vaino,   Thank you very much for your  e-mails.   I tried
to read the attachments but the computer  did not yet succeed
in opening them. But that is entirely my fault. I only recently acquired Windows
98 after several years operating under MS-DOS only. I still have to
learn a lot about doing things  under Windows. But I am lucky in having
several amateur friends  around that are willing and able to help me out.
So don't worry.
I certainly am going to read the  attachments after enlisting
the help from one of those friends. Interesting to learn that finding ERP
from field strength measurements even over short distances does not
work. Does that imply the CCIR graphs are no  good?

Allright Dick,  surely would appreciate your comments
about our experiences on the field of measuring LF/MF
field strengths over various distances.
Please let me know if you wish me to resend attachments.
I have been using Win98 since February, Win95 before that.

Before I retired I was a member of CCIR Study Group 6
(Ionospheric Propagation) but supposedly have been spending
more time on monitoring and measuring VLF/LF/MF stations.
CCIR Ground propagation curves are the best available and
they give good idea how the different soils can behave.
Main problem is that they don't work in everyday practice
while one tries to calculate EMRP from point measurements.

DGPS advisor has been prof David Last (G3???) at the
University of Wales. They have their own ground conductivity
data bank for the whole world. We proved with our measurements
that their data bank values are not directly applicable for
our conditions. The situation elsewhere is not, of course the
same but we were first to start using DGPS on our car ferries.
I understand the soil in England is much more homogeneous, not
to talk about the Netherlands. We have our archipelagos etc.
The seasonal GW variation was already documented in 1940's
but some people on DGPS business have no knowledge of it.
The variation on high seas is much less than on ground paths.

I have about 500 flight hours on that specially equipped
Piper Arrow. In 1974-75 we produced a ground conductivity map
of Finland by measuring available and some temporary stations.
It has been a series of calculations, measurements,
comparisons.
First LF/MF campaign for EBU started in 1948 at Hki/Laajasalo
with RCA 308 and other rather difficult to use Fs equipment.

Latest assignment was to measure all Finnish and Swedish
DGPS beacons and to produce reports for Maritime Authorities.
So we still have 30 LF/MF/HF frequencies being measured 24h
a day with R&S ESH3 and active CCIR type 1 m monopole.
I surely wish to contribute for this 135 kHz business before
these ESH3 measurements will be stopped at the end of 1999.
1989-1998 measurement data have been saved to a CD Rom
and I have been hoping that some young student will help me.
Contrary to most DGPS people we have no commercial interest.
We took it as another interesting and rewarding hobby. Hi


I am grateful for your quick reply and useful comments.
No, there is no need to send the attachments anew. I am sure
that my good friend PA0GJH can help me out.
I think most LF-amateurs will be most interested in your
comments. You must be one of the few having real experience over many years with
respect to field strength measurements.
I therefore ask whether you would mind me putting some of
your e-mails to me on the reflecor of the RSGB-LF-Group?

Sure Dick, use of any information would be just fine.
I hate to sound 'professional' after all,
it's supposed to be fun for most hams..?

I send monthly contribution to Martin Harrison, G3USF
for 'The Six and Ten Report', for observed Au and Es.
This contribution will continue in the present form
until the end of 1999, after that Sodankyla VHF
measurements will be ended, which is unfortunate.
Especially Band I observations have been useful.

Jokela (60N34 25E00) VHF/UHF measurements will continue
and we'll see what will happen to ESH3 measurements.


With the help of PA0GJH  as a test one of the graphs in your
attachment appeared on my monitor in beautiful colours.
But this at the same time brings up a question: what do the
different colours mean?
And what is the quantity along the vertical axis? (db)microvolts I presume?
Thank you for your permission to put some of the info in your
emals on the reflector!

Glad to hear you are getting along with Win98.
Windows in general can be called a two-edged sword.
My Windows generally collapses at least once every day.
Also glad about your efforts to explain people how to
construct a simple but useful instrument to measure Fs.
I know we have had a luxury of using calibrated Fs
equipment ever since 1948, first RCA then R&S HFH/ESH.
I have been producing most graphics with Lotus Freelance
and the present version is Freelance 97 edition.
For some special formats the earlier version is better.
Windows beats DOS in some graphics work, but DOS is fb.
Freelance automatically produces different colors for
every day of a month and legend shows the color vs day.
In general this kind of picture shows a general daily
variation of hourly Fs during a calendar month.
Of course, the fine structure, eg 'morning effect'
don't clearly show like they are seen in a pen recorder.
It has been an EBU practice to use dB(uV) for eg input
voltage and dB(uV/m) for Fs, since the 1950's.
I zipped the available 1998 graphs for 138.83 & 77.50.
Some big Fs excursions must be due to change in radiated
radiated power. In 1998 the noise threshold level for
138.83 with 200 Hz Bandwidth is 5 dB(uV/m)-> (-7 dB(uV).
There are some qrt periods on 138.83 but never with 77.50.

Further to my e-mail attached you will find
some explanatory pictures about the meas system. 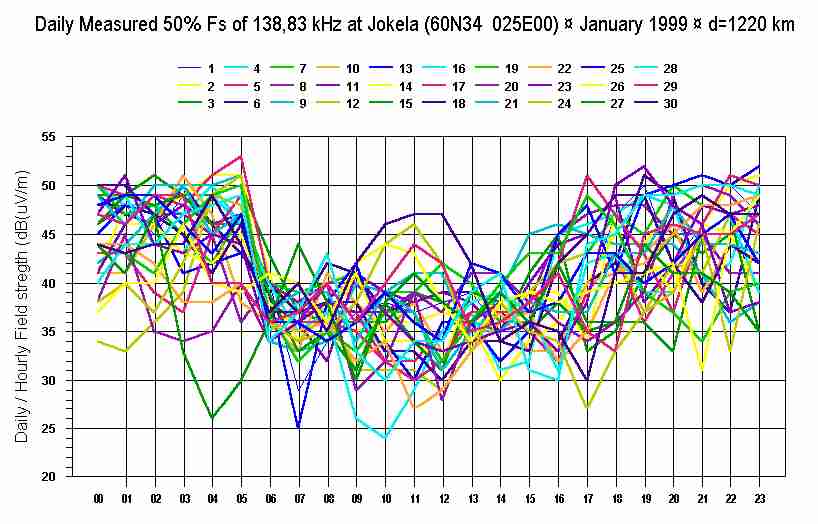